Sony R&D engineers tested out some brand new, prototype camera stitching and 3D technology at today's Syracuse University women's basketball game in the Carrier Dome. About a dozen students who are taking a 3D Production elective at the Newhouse School were among the first people in the world to see this technology.
The technology stitches multiple HD cameras together to create one large image. Within that large, panoramic image, the engineers can operate what they called a "virtual camera" using a joystick that provides pan/tilt/zoom control. In the photo below, you can see the full, stitched panoramic image at the top. The white rectangle represents what part of the image the virtual camera sees, and is displayed in full beneath the panoramic image. 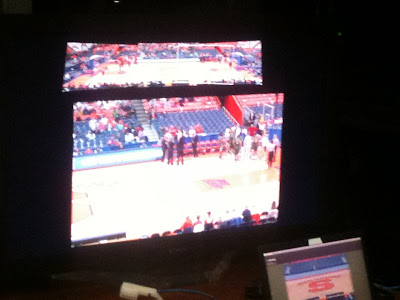 By stitching together multiple stationary cameras, action on the entire court can be captured at every moment. By feeding those cameras say, back to ESPN's headquarters in Bristol, a "virtual camera" operator could control the game cam. Instant replays would be possible of any part of the court at any time. Additional "virtual cameras" could be added so, for instance, additional operators could get tight ISOs using the same feed.
Because the cameras are stationary, the Sony engineers said it would be possible to create a depth map by measuring the distance from the camera to the various reference points around the court. Using this depth map – a 3D wireframe of the court – it would be possible to achieve a potentially lower cost but still effective 3D image. They didn't have this set up at the demo but said it would be possible.
The system consisted of three cameras placed side by side on the main TV camera platform overlooking the court. The three cameras were precisely positioned and leveled so that among the three of them the entire court could be seen at all times. These little guys go for $50-60,000 each with a lens. Notice that the left and right cameras are getting cross shots instead of being positioned straight ahead. This made it easier for the geometry to match up. 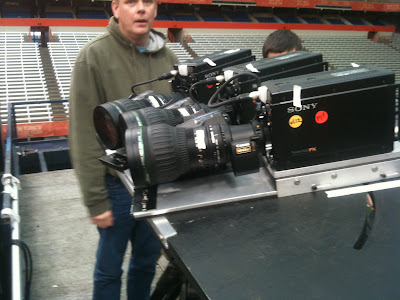 The cameras sat on a rudimentary plywood rig on a tripod: a true prototype. Sony and SU Athletics chose the women's basketball game as opposed to a men's game because there is much less commotion and more room on the camera platform. 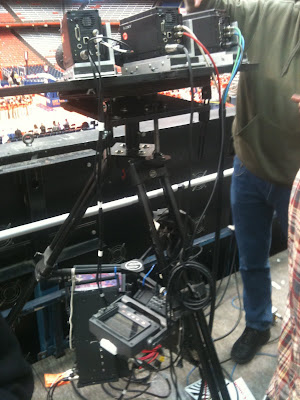 The signal from the cameras ran underneath the bleachers to a table with CCUs and their remote controllers, a couple flatscreen displays driven by a Leitch multiviewer, a high-end $35,000 broadcast reference monitor, a Vaio laptop with a USB joystick, and three HDCAM tape decks to record the three cameras. The engineers spent a day and a half setting up the equipment. 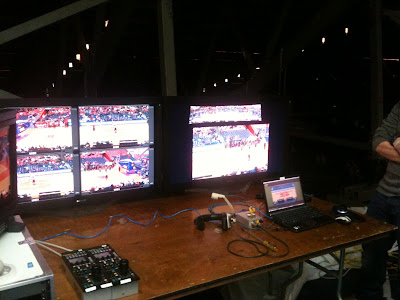 The business appeal for this type of research is cutting costs. ESPNU, for instance, plans on adding hundreds of more events in the coming years. By installing a few of these rigs in an arena, all of the camera control, switching and replays could happen in Charlotte (home of ESPN Regional TV) or Bristol and save having a full crew at an arena all day.
In theory, this technology could also allow the viewer back home to have complete control of their game watching experience.
Looking forward, the use of 4K cameras could provide more flexibility with zooming in and not losing pixels in a HD frame. Sony will use the footage they recorded today at NAB and for other demonstrations.
The Sony guys also had a 3D TV and a box of those goofy glasses to show off their 3D reel. Aside from sports, it included a music video, animated movies, and video games. The seemingly unanimous best-looking 3D programming is golf. They covered a few holes at the Masters tournament last year with 3D cameras, and this coming year the plan is to cover every hole with a 2D and 3D camera crew – in other words, around 200 cameras in all.
Neal Coffey, who will teach the 3D Production elective this semester and is head of the university's Video Production Unit, arranged the visit with Roger Springfield, who oversees the athletics department's media.
By Ryan Balton at 3:59 PM No comments:

10: the number of NCAA championships that the Syracuse men's lacrosse team has – and the number of years that CitrusTV has produced its Lacrosse Preview Show.

Just like everything at CitrusTV, students are in charge of all aspects of the production of the annual half-hour show that takes an in-depth look at the upcoming season. Almost all of the show is shot at the athletic department's lacrosse media day, which happens the week before classes start each spring.

CitrusTV members cut their winter breaks short and trek back to Syracuse to shoot a press conference, interviews and players practicing. While traditionally lacrosse media day has been held in the Carrier Dome – where the team plays – this year it was held in Manley Field House, which was renovated over the summer from a basketball court surrounded by bleachers into a football/lacrosse field. Guess they wanted to show off the new digs. 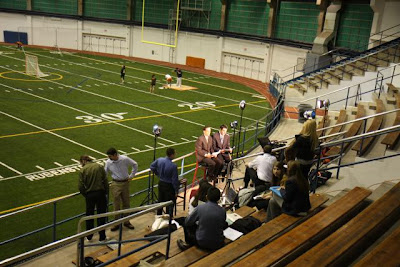 The production consisted of two sets. The primary set, pictured above, was in a balcony that overlooks the field. This is where we shot all of the on-camera elements with the hosts, Scott Grodsky (former CitrusTV sports director) and Dan Moscaritolo. We shot all of the teases, tosses, readers and the show's open and close at this location. This was where I spent almost all of my time, taking care of the lighting and camera setup and operation.

Click here for a 360 view of the primary set
We used a pair of Sony Z7U's on sticks – still in standard def as all of the archived footage we have is in SD and Time Warner Cable Sports isn't HD yet. You can also see a few Arri's and the portable prompter we used in the photo below. 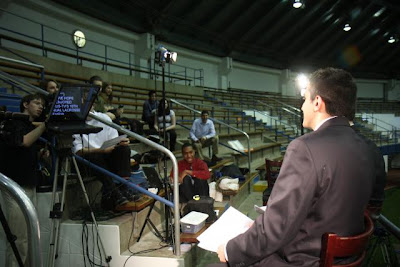 This location gained a third chair in the afternoon for an on-set interview with John Galloway - one of the players - and John Desko, the head coach. Coach Desko is in the picture below. 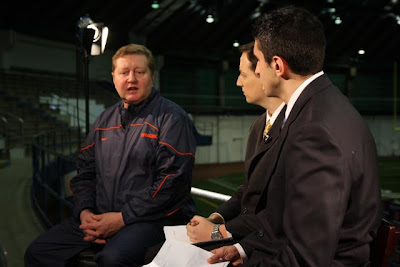 The secondary set consisted of one camera to capture featurey shots of the players. The shots will be used in the show's open and various elements throughout the show. The players were miked up at this location so they could say their name and year, and repeat some lines that we fed them. 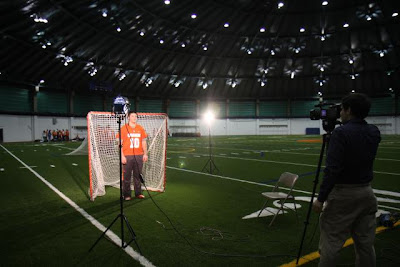 A couple ENG teams consisting of reporters and videographers also were walking around on the field to interview players and tape them practicing. A podium and backdrop were set up on the sidelines where Coach Desko spoke in a press conference. 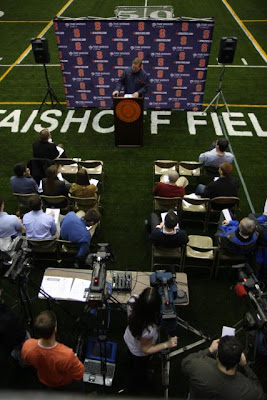 The show, produced by CitrusTV's new sports director Ryan Koletty, will air on Time Warner Cable Sports, channel 13 for TWC customers in upstate New York, and on the Orange Television Network, channel 2 on campus. It will also appear on CitrusTV.net.

Maybe that's a biased title for this post... but CitrusTV was the only media organization that had video online from Yankee Stadium before the inaugural New Era Pinstripe Bowl kicked off between Syracuse and Kansas State on Dec. 30.

This playlist has all the clips posted before the game. After arriving at Yankee Stadium around 11 a.m. and picking up credentials and media goodies (can you say Pinstripe Bowl teddy bears?), I did all of the camerawork and editing you see here. All of the clips went online before the start of the game at 3:30.

At halftime, I ran off the field before the 20 minute clock started, and walked back out with 8 seconds to the top of the second half, leaving behind this video featuring some of the scenes around Yankee Stadium during the first half. No highlights of the game because ESPN owns the exclusive online rights to the actual game.

I also was able to post some photos on Twitter and Facebook. My most favorite views were generated by this awesome iPhone app I read about on Gizmodo called "360 Panorama" a few days ago and purchased for just a buck. It uses the sensors in the iPhone to paint a panoramic view and then allows for instant tweeting. I'm not big into Twitter, as you may know, but since the functionality was built into the app, it provided a quick and easy way to get the stunning views (for a cell phone and a 99 cent app, anyway) online.


And finally came the post-game analysis, which I shot, edited and posted before leaving the stadium.. or rather, running to the garage that was about to close with my car still in it. The analysis was shot by me, and the celebration clips were shot by Eric Forman, also shooting the game for Citrus. (My tape from the game and celebration was being used to shoot some additional standups.) Over 800 views on this video in about two days.

Oh, and, by the way... remember that little "excessive celebration" penalty that Kansas State got? Take a look at the poor cameraman who almost got plowed over. Oh wait, that's me. Oops.

Here's the breathtaking look from my angle: 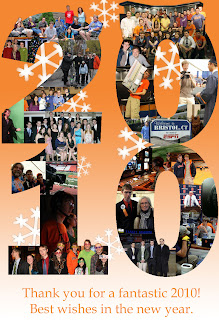 Click to see a larger view
By Ryan Balton at 4:46 PM No comments: